The deﬁnitions of the absorption and scattering coeﬃcients on the Inherent Optical Properties page were in terms of an inﬁnitesimally thin slab of water. We now must reformulate those conceptual deﬁnitions so that they can be applied to actual measurements on ﬁnite thickness of water in a measuring instrument.

Just as was done for the absorption and scattering coeﬃcients (recall Eqs. 1 and 2 of the IOP page), we can deﬁne the beam attenuation coeﬃcient as

where is the attenuance, or fraction of power absorbed or scattered as light passes through the slab of inﬁnitesimal thickness . However, any instrument must make its measurements on a slab of some ﬁnite thickness , which is typically between 0.01 and 1 m.

Figure 1 shows a ﬁnitely thick slab of water with an incident power and transmitted power , where the wavelength argument has been omitted for brevity. Within the slab the power has magnitude after passing through a thickness of material. In going from thickness to , the power changes from to , where because the transmitted power decreases as the thickness traversed increases.

Recalling that the attenuance is the fractional change in power, we can rewrite Eq. (1) as

where the minus sign accounts for being negative, whereas all other quantities are positive. Assuming that the medium within the slab is uniform, so that is independent of , we can integrate Eq. 2 from to , which corresponds respectively to powers and . This gives

which can be rewritten as

This equation gives the beam attenuation coeﬃcient in terms of the measurable incident and transmitted powers and the ﬁnite thickness of the slab.

Equation (3) is the key to measuring the beam attenuation. However, there are additional subtleties in this measurement related to the instrument design, which is shown in more detail in Fig. 2. The development above implicitly assumed that the incident light was perfectly collimated (all light rays travel in exactly the same direction) and that the detector omits all scattered light. Neither requirement can be fully satisﬁed in a real instrument. Even a laser beam has some divergence, and any detector has a ﬁnite ﬁeld of view (FOV) or acceptance angle. If the detector FOV is 1 deg, for example, then the detector will detect rays that have been scattered by 1 deg or less, as well as unscattered light. This undesired detection of scattered light will make the transmitted power too large, and thus too small. The magnitude of this error depends both on the detector FOV and on the volume scattering function of the water, which determines how much light is scattered through angles smaller than the FOV. Although these errors in beam attenuation measurements have been studied in many papers (see, most recently, Boss et al. (2009) and references therein), it is diﬃcult to correct for the error in a particular measurement because the VSF is usually unknown, especially at very small scattering angles. Unfortunately, as Boss et al. show, the diﬀerences in values as measured by diﬀerent instruments can be tens of percent. Indeed, Boss et al. end their paper with the comment, “We conclude that more work needs to be done with the oldest (in terms of availability of commercial in-situ instruments) and simplest (so we thought...) optical property, the beam attenuation.”

Figure 2: Schematic instrument design for measurement of the beam attenuation coeﬃcient . represents the power scattered into all directions, as indicated by the red arrows.

If there were no scattering, then the instrument design used to measure beam attenuation would give the absorption coeﬃcient . However, at least some scattering is always present in sea water, which requires modiﬁcation of the instrument design shown in Fig. 2. When measuring , any light lost from the beam because of scattering will be attributed to a loss of light due to absorption. Thus it is desirable that the detector collect as much scattered light as possible. Because most scattering is through small angles, a common instrument design is to use as large a detector as possible at the end of the measurement chamber to collect forward scattered light. Such an instrument is shown schematically in Fig. 3.

Figure 3: Schematic instrument design for measurement of the absorption coeﬃcient . represents the power lost to the detector by scattering into angles greater than the detector ﬁeld of view.

An instrument of this design typically collects light forward scattered through angles of a few tens of degrees (depending on the design of the particular instrument), which does account for most of the scattered light. However, some light is still lost “out the side of the instrument” by scattering though larger angles, as represented by in the ﬁgure. To get an accurate absorption measurement, it is necessary to perform a scattering correction, i.e., to estimate and to account for this loss when computing . The equation for computation of then becomes

In this equation, now includes the measured transmitted power due both to unscattered light and to light scattered through angles less than the detector FOV. The term adds back the unmeasured loss of power due to scattering through angles larger than the FOV. Estimating the value of is of course diﬃcult because the amount of scattering at angles greater than the instrument ﬁeld of view depends on the (usually unknown) volume scattering function. Techniques for doing this scattering correction are given in Zaneveld et al. (1994).

Another way to account for scattering in absorption measurements is to place the entire measurement chamber inside an integrating sphere. An integrating sphere is a hollow sphere coated on the inside with a highly reﬂective white material (usually Spectralon, which has a reﬂectance greater than 99% at visible wavelengths and is a diﬀuse reﬂector). The inner surface of the sphere reﬂects incident light into all directions, which after many reﬂections makes the interior light ﬁeld homogeneous and isotropic. Thus it is possible to measure the power at only one location within the sphere in order to compute the total power within the sphere. Integrating spheres are commonly used in laboratory spectrophotometers to collect the scattered light, and ﬂow-through integrating-cavity absorption meters are now commercially available (e.g., PSICAM).

after recalling the deﬁnition of the absorptance . Using to convert from natural to Naperian logarithms gives

where is called the optical density or absorbance. Spectrophotometers usually output their measurements as a value of , from which can be computed according to the thickness of the sample volume.

It is possible to measure the scattering coeﬃcient , for example by collecting all scattered power in an integrating cavity and then using

It is also possible to measure the volume scattering function and then obtain by integration of the VSF over all scattering angles. However, neither of these paths to is often taken.

The scattering coeﬃcient is usually obtained from measurements of the beam attenuation and absorption coeﬃcient , and the deﬁnition of :

Note, however, that there is a philosophical problem here, even if the practical diﬃculties in measuring and can be overcome well enough to obtain usefully accurate values. The philosophical problem is that to obtain good values of and , you need to know the VSF in order to correct for the ﬁnite-FOV errors in and to perform the scattering correction for the measurement. Because the VSF is seldom measured, you must make assumptions about the scattering in order to obtain values for and , in order to obtain a value for the scattering . Thus the value obtained for the scattering coeﬃcient depends on the a priori assumptions made about scattering in the water being studied. This circular reasoning is tolerated in optical oceanography simply because of the diﬃculties of designing instruments to make accurate measurements of each IOP independent of assumptions about the other IOPs.

As with the measurement of beam attenuation, measurement of the volume scattering function employs a narrow collimated beam and a narrow-ﬁeld-of-view detector. Now, however, the detector views the incident beam at a given scattering angle. The basic geometry is shown in Fig. 4. 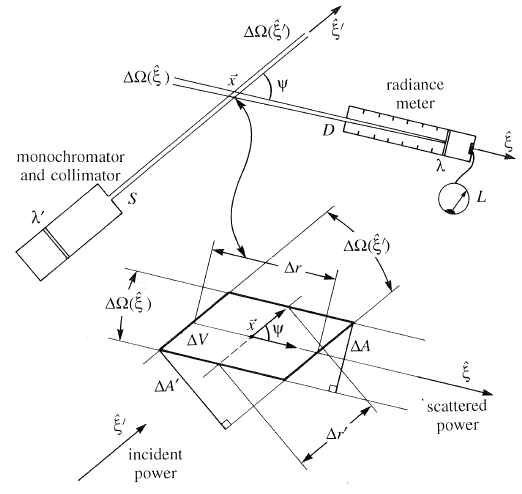 Figure 4: Geometry for measurement of the volume scattering function.

The intersection of the incident beam and the detector FOV deﬁne a volume of water in which the scattering from the incident direction into the scattered direction takes place. The scattering angle is deﬁned as shown by the angle between and (recall Eq. (5) of the page on geometry). The incident power traveling in direction into volume generates scattered power in the detector FOV of solid angle centered on direction over a path length of . The deﬁnitions of the VSF on The Volume Scattering Function page give us an operational formulas for the VSF in terms of measurable quantities:

which as previously noted is equivalent to

As always, there are implicit assumptions and subtleties involved with these equations. It is assumed that the scattering volume is small enough that only single scattering takes place within the volume, but large enough to contain a representative sample of scattering particles. It is necessary to correct for attenuation of the incident and scattered beams along the entire path from the source to the scattering volume to the sensor, which presumes knowledge of the beam attenuation coeﬃcient . (Note again our problem: to measure the VSF we need to know , but we need to know the VSF in order to make the FOV correction for the measurement of .) In the pioneering General Angle Scattering Meter (GASM) developed by Petzold (1972), it was diﬃcult to accurately determine the scattering volume , which changes with scattering angle, because of the diﬃculty of maintaining mechanical alignment of the moving parts as they swept the detector through the full range of scattering angles. The calculations and engineering considerations needed to implement Eqs. 5 or 6 in GASM are given in Petzold’s classic report.

More recent instruments have used other designs to avoid various problems. For example, Lee and Lewis (2003) used a novel design based on a rotating periscope to scan through scattering angles from 0.6 to 177.3 deg. A more recent in situ instrument, the LISST-VSF can measure the VSF at 515 nm in the range of to 150 deg, along with the scattering coeﬃcient and beam attenuation and selected components of the Mueller matrix for polarized light scattering. See Slade et al. (2013).

In sea water both absorption and scattering are always important. Depending on the water constituents and the wavelength, one process can dominate the other, but neither can be ignored. Thus one IOP cannot be measured independently of the others. Clearly, there is need for continued development of IOP instruments with novel designs that minimize the measurement problems mentioned above.