The state of polarization is described by the four-component Stokes vector , where superscript denotes transpose, is the total radiance without regard for its state of polarization, speciﬁes the linear polarization resolved in planes parallel and perpendicular to a conveniently chosen reference plane, speciﬁes the polarization resolved in planes oriented to the reference plane, and speciﬁes the right or left circular polarization. The choice of the reference plane for speciﬁcation of the and components is arbitrary and can be made for convenience. The direction of propagation of the radiance is given by a unit vector , so that the Stokes vector can be written as when it is desired to indicate both its components and direction. Direction can be speciﬁed by the polar () and azimuthal () directions in a spherical coordinate system as shown in Fig. 1. In that ﬁgure, and are unit vectors speciﬁed by the directions of increasing ( at the pole or direction in a cartesian coordinate system) and increasing ( in a conveniently chosen azimuthal direction such as pointing east or toward the Sun). 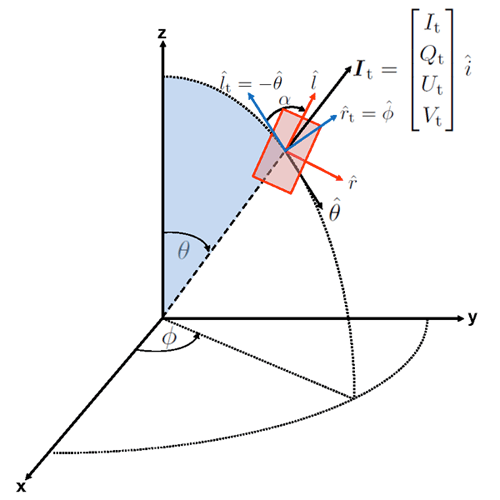 This radiance is being measured by a sensor illustrated by the red rectangle in Fig. 1. The Stokes vector measured by that sensor has its and components resolved along perpendicular () and parallel () directions chosen for convenience relative to the orientation of the sensor. The sensor will measure the TOA radiance as a Stokes vector . For an incident radiance , the optical system comprising the sensor itself and any associated optical components (mirrors, lenses, etc.) will convert the incient radiance into a measured value given by , where is the Mueller matrix that describes the optical properties of the sensor optical system. is deﬁned relative to the sensor reference directions and . In order for to operate on the TOA radiance , which is deﬁned with reference directions and , must ﬁrst be transformed (rotated) from the meridional-based , system to the sensor-based , system.

Let be the angle between the parallel reference directions for and for the sensor. With the choice of being positive for clockwise rotations from to as seen looking “into the beam” (looking in the direction), the transformation is given by the rotation matrix

Thus, the radiance as measured by the sensor is

It is important to note that the radiance measured by the sensor, depends both on the ”true” TOA radiance , the sensor optical properties via , and the orientation of the sensor relative to the local meridional plane. is ﬁxed for a given sensor, but and change from moment to moment as the sensor orbits and views the TOA radiance in diﬀerent locations and directions. (To be exact, there are long-term changes to caused by degradation of the sensor optical surfaces. These changes are monitored on-orbit and corrected by a cross-calibration technique.)

The quantity of interest here is the measured TOA radiance magnitude, which is given by the ﬁrst element of the Stokes vector. Using (1) in Eq. (2) gives this to be

Clearly, if and all elements of other than the element are zero, then the sensor is not sensitive to the state of polarization and . Physical arguments and numerical simulation show the circular polarization of the TOA radiance is very small: . This term is therefore neglected in the present correction algorithm. It is customary to deﬁne the elements of the reduced Mueller matrix by . Similarly deﬁning reduced Stokes vector element by and , Eq. (3) becomes

Gordon et al. (1997a) give the general procedure for measuring and in the laboratory. Meister et al. (2005) give the details of these measurements for the MODIS sensors. These quantities, which specify the polarization sensitivity of the instrument, are determined before the instrument is launched; they are thus known. Angle is determined by the orbit and pointing geometry of the sensor. It remains to determine the elements of .

Following Eq. (3) of the Problem Formulation page, the total TOA polarized radiance can be decomposed as

Here, as before, the Rayleigh (R), aerosol (a), and Rayleigh-aerosol (Ra) radiances are at the TOA; the glint (g), whitecap (wc), and water-leaving (w) radiances are at the sea surface. The surface values are transmitted to the TOA via the appropriate direct () and diﬀuse () transmittances. According to Eq. (2), each of these radiances must be known in order to predict what the sensor will measure for a given TOA radiance and, thereby, to determine the correction needed to account for sensor polarization eﬀects.

The surface-glint and atmospheric polarization contributions to the TOA signal are computed separately. Sea-surface glint can be highly polarized. This glint contribution to the TOA signal is computed using a vector radiative transfer code assuming a Rayleigh-scattering atmosphere above a rough Fresnel-reﬂecting ocean surface (Gordon and Wang (1992), Wang (2002), Meister et al. (2005)). The water-leaving radiance is at most 10% of the TOA total, and the whitecap contribution is generally even less. These two terms are therefore ignored in the present development. The eﬀect of aerosols and Rayleigh-aerosol interactions depends on the particle size distribution and concentration of the aerosols, which are unknown during atmospheric correction. Fortunately, numerical simulations show that the Rayleigh contribution to the TOA polarization is usually much greater than the aerosol-related contributions. Therefore, the aerosol contributions are also ignored and the polarization correction is based on the TOA Rayleigh radiance. The total TOA Stokes vector is then modeled as the sum of the glint and Rayleigh contributions.

[This page ends the discussion of the atmospheric correction algorithms used by the NASA Ocean Biology Processing Group for processing of satellite imagery.]