The contribution of white caps and foam to the TOA radiance depends on two factors: the reﬂectance of whitecaps per se and the fraction of the sea surface that is covered by whitecaps.

Following Gordon and Wang (1994b), the contribution of whitecaps and foam at the TOA is

where is the whitecap radiance. It is assumed that the whitecaps are Lambertian reﬂectors, so that (unlike for ) does not depend on direction . This gives the interpretation (Gordon and Wang (1994b), page 7754) that ” is the reﬂectance–the reﬂected irradiance divided by the incident irradiance–that a Lambertian target held horizontally at the TOA would have to have to produce the radiance .” can be interpreted as the average reﬂectance of the sea surface that results from whitecaps in the absence of atmospheric attenuation.

The eﬀective whitecap irradiance reﬂectance is taken from Koepke (1984) to be 0.22 (albeit with error bars). This reﬂectance is independent of wavelength. This gives , where is the fraction of the sea surface that is covered by whitecaps. The fractional coverage is taken from Stramska and Petelski (2003), who give two models for for :

where is the wind speed in at 10 m. Formula (3) for undeveloped seas is used on the assumption that if the seas are well developed it is probably stormy, hence cloudy, so that remote sensing is not possible. The blue curve in Fig. (4) shows for undeveloped seas.

The ﬁnal model for is then taken to be

A whitecap correction is applied for wind speeds in the range . The factor is a normalized whitecap reﬂectance that describes the decrease in reﬂectance at red and NIR wavelengths. This factor is taken from Figs. 3 and 4 of Frouin et al. (1996); the values are

Linear interpolation is used as needed between these values. Figure 1 shows the whitecap reﬂectance as given by Eq. (4) when . 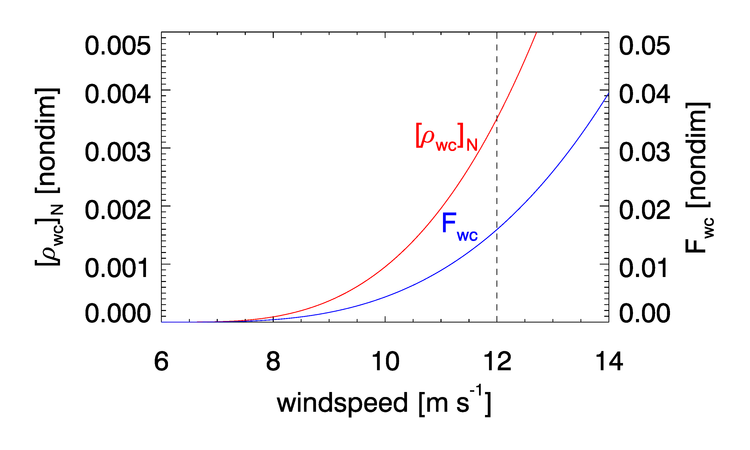