Phytoplankton have a major eﬀect on the ocean color and are one of the primary reason for studying it. Additionally, these microscopic, single cell, free -ﬂoating organisms posses chlorophyll, pigment that allows them to harvest the sunlight and through the process of photosynthesis produce energy rich organic material, while releasing the oxygen. That makes them the most important primary producers in the ocean, base of the oceanic food web and important component of the global carbon cycle (Falkowski and Raven ( 2007)). For all these reasons it is of a great importance to understand phytoplankton abundance and dynamics.

Phytoplankton are taxonomically diverse group—it comprises more than 10,000 species and taxa (Jeﬀrey and Vesk (1997)). Number wise, the most important groups of phytoplankton include diatoms, dinoﬂagellates, coccolithophorids, although many other types of algae are part of phytoplankton. Additionally, an important group from the realm of bacteria, cyanobacteria, is part of the phytoplankton. They come in diﬀerent sizes (from to ), shapes (spheroids, cylinders, prolate spheroids and many more), builds (cellulose, silicate or calcium-carbonate cell walls) and with many diﬀerent physiologies. Phytoplankton contains large number of diﬀerent pigments, most important of them - chlorophyll. Depending on group or taxa, varying concentrations of other pigments will be present in the cell - other chlorophylls, carotenoids, billiproteins (Jeﬀrey et al. (1997)). All speciﬁcs of phytoplankton make up mentioned above will impact the phytoplankton optical properties, and allow us to study their ecology and evolution in time by measuring them. Chlorophyll ﬂuorescence is discussed in more detail on the Chlorophyll Fluorescence page.

Phytoplankton absorb sun light and use this energy to produce energy rich organic material (photosynthesis). Chlorophylls, present in all phytoplankton cells, will cause 2 dominant peaks in absorption spectra, primary at blue ( 440 nm) and secondary peak in red part of the spectra ( 675 nm). Presence of other pigments (depending on species and taxa) will cause the broadening of blue peak and appearance of additional absorption maxima. These taxa speciﬁc absorption peaks have been used as an optical detection tool in situ (Kirkpatrick et al. (2000)) as well for development of remote sensing algorithms (Subramaniam et al. (2002); Tomlinson et al. (2009)).

But, absorption by phytoplankton is not a simple sum of absorption coeﬃcients of individual pigments. Spectra of phytoplankton absorption, , varies in magnitude and shape due to the diﬀerent cellular pigment composition and pigment packaging (Bidigare et al. (1990); Bricaud and Stramski (1990); Hoepﬀner and Sathyendranath (1991); Ciotti et al. (2002)); Bricaud et al. (2004)). Speciﬁc pigment-protein complexes present in the cell will cause changes in absorption spectra and magnitudes . Furthermore, the increase in cellular pigment concentration and cell size, i.e. packaging eﬀect, will ﬂatten the speciﬁc absorption spectra Duysens (1956); Kirk (1976); Morel and Bricaud (1981); Johnsen et al. (1994)).

For theoretical calculations of phytoplankton absorption and inversion of measured absorption spectra we need measurements of in vivo spectra. Here we display (Fig. 1) and link two such databases that are based on absorption in solvent with absorption spectrum shifted to match those observed in-vivo. One is from Bidigare et al. (1990) (here), and the other from Bricaud et al. (2004) (here).

Figure 1: Mass-normalized absorption of phytoplankton pigment based on studies by Bidigare et al. (1990) (left) and Bricaud et al. (2004) (right). Links to the data are provided in the text.

Example of absorption spectra of phytoplankton normalized by chlorophyll were provided by Bricaud et al. (1995); Ciotti et al. (2002) and showcase variability in pigments, packaging (ﬂattening of the peak where absorption is high) and diﬀerences between large and small cells (Fig. 2, their data is (here). 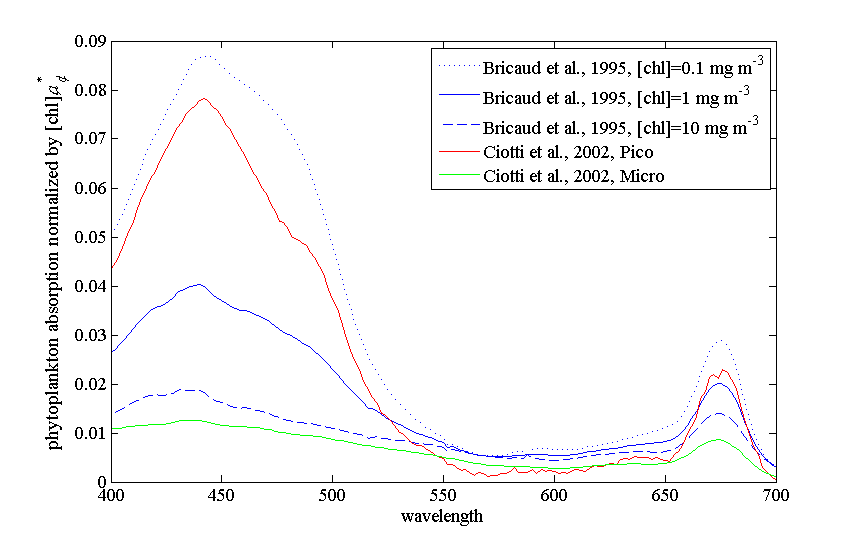 Figure 2: 2. Chlorophyll normalized phytoplankton absorption based on Bricaud et al. (1995) and Ciotti et al. (2002). Link to data is provided in the text. 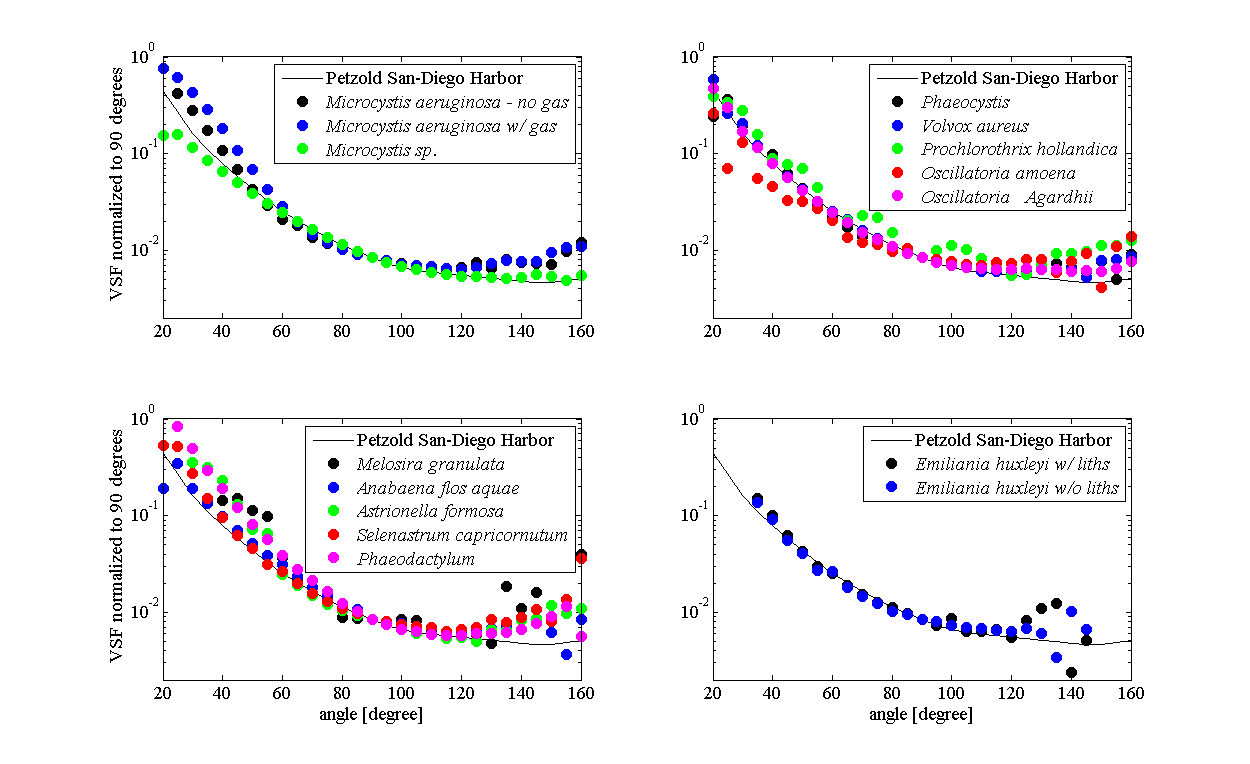 Figure 3: 3. Scattering by diﬀerent phytoplankton in comparison with the San-Diego Harbor VSF of Petzold (1972). Data from Volten et al. (1998). Link to data and their uncertainties is provided (here)

Following basic formula of inherent optical properties where scattering is the diﬀerence between attenuation of the light and absorption (), and mostly featureless attenuation spectra of phytoplankton, one can assume inﬂuence of the absorptive properties of the cell to the shape of the spectral scattering (Bricaud et al. (1983)); a photon absorbed is not scattered. The scattering spectra will, in general, be a inverse picture of absorption spectra of the same species. Similar patterns are observed in backscattering too (Stramski et al. (2001); Gordon et al. (2009)). More exactly, the phenomena of anomalous dispersion (van de Hulst, 1957; Bricaud et al. (1983)) explains the modulation of the scattering spectra near region of strong absorption bands.

Portion of the light absorbed by phytoplankton cell can be emitted at another - longer wavelength; a process referred to as ﬂuorescence. A recent comprehensive review of the subject is provided by Babin (2008). Several phytoplankton pigments (chlorophylls , pheopigments and phycobilins) ﬂuoresce, with chlorophyll a ﬂuorescence being the most signiﬁcant one. Although ﬂuorescence is only a form of energy dissipation of the absorbed light, secondary to photosynthesis, it is still signiﬁcant enough to be observed from space (Neville and Gower (1977); Huot et al. (2005)).