The introduction to atmospheric correction on the previous page illustrated the nature of the problem. It is now time to deﬁne the problem quantitatively.

The total radiance measured by a satellite-borne sensor at the top of the atmosphere (TOA) comes from contributions by atmospheric scattering, ; Sun and sky radiance reﬂected back upward by the sea-surface and reaching the TOA, ; and water-leaving radiance that reaches the TOA, :

For brevity, the viewing direction and wavelength are not shown. Expanding this equation into further levels of detail requires the deﬁnition of many diﬀerent radiances, and precise notation is needed to minimize confusion. The atmospheric contribution is always considered to be at the TOA. However, the surface-reﬂected radiance and water-leaving radiance can be formulated either at the sea surface or at the TOA. For these radiances, a superscript TOA will be used to specify the TOA value. Thus will denote the water-leaving radiance just above the sea surface, and will denote how much of reaches the TOA. Table 1 summarizes the various radiances introduced in this chapter and used throughout this report.


Table 1: Radiance notation. The notation here corresponds to that seen in Fig. 1. Spectral radiance has SI units of ; in practice is often used.

In practice, the aerosol and aerosol-gas contributions are usually grouped together and treated as one contribution, sometimes denoted and often called just the aerosol contribution. The sky reﬂectance term is accounted for as part of the Rayleigh correction, which incorporates reﬂectance by the sea surface. For some sensors that were speciﬁcally optimized for ocean color (e.g., CZCS and SeaWiFS), the strongest part of the Sun glint (the Sun’s glitter pattern) is avoided by pointing the sensor in a direction away from the Sun so that almost no direct glint is present in the image. However, there is still a correction for residual amounts of Sun glint. Figure 1 illustrates these contributions to the TOA radiance. 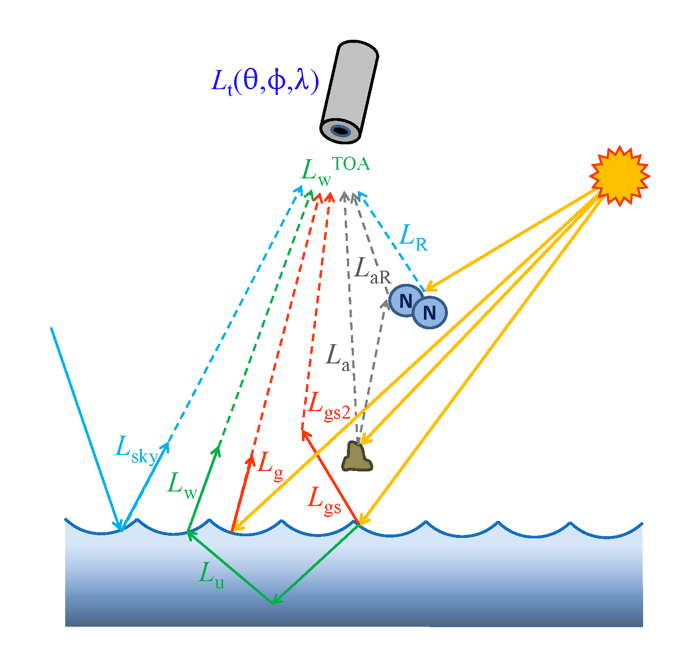 Figure 1: Qualitative illustrations of the various processes contributing to the total TOA radiance. The notation corresponds to Table 1, and the colors correspond to the spectra of Fig. 5 of the previous page. The blue N-N represents a nitrogen () molecule, or any other atmospheric gas molecule; the brown blob represents an aerosol particle. The red glint terms are discussed on the next page.

Thus the total TOA Rayleigh contribution has been factored into a product of terms involving a Rayleigh term times gaseous transmittances and a polarization-correction factor. The diﬀerence between Eqs. (3) and (4) is primarily a matter of simpliﬁcation for presentation purposes. The term came into the nomenclature because MODIS has large polarization sensitivity and this requires correction. Earlier papers by Gordon and Wang often ignored the gaseous transmission terms because they were only considering ozone, which could be “taken oﬀ the top,” so to speak, with the remaining problem being eﬀectively formulated below the ozone layer. The term is computed using a standard atmosphere and only non-absorbing gases and . This allows ”standard” Rayleigh radiances to be computed as a function of Sun and viewing geometry. The gaseous transmittances are computed by use of absorption coeﬃcients, computed path lengths, and gas concentrations for the various gases. The term is computed for each image pixel as a function of atmosphere and surface polarization states (modeled Rayleigh and glint Stokes vectors) and the sensor-speciﬁc polarization sensitivity with viewing direction.

All of Eqs. (2), (3), and (4) can be found in the literature. They all give the same TOA total radiance . Which form is used in a particular instance is determined by convenience. Forms (2), (3) are often convenient for discussions of theory, whereas form (4) is convenient for operational atmospheric correction algorithms.

The goal of atmospheric correction is to convert a measured top-of-the-atmosphere radiance into the corresponding sea-level water-leaving radiance . Since only is measured, this requires estimation of the various atmospheric and surface-reﬂectance terms seen in Eqs. (3) or (4) so that they can be subtracted from in order to arrive at . How this is done is discussed in Level 2 of this Chapter.