This page gives two examples of wave elevation variance spectra. The Pierson-Moskowitz omnidirectional spectrum describes gravity waves in a ”fully developed” sea. A fully developed sea is an idealization of the statistically steady-state wave ﬁeld resulting from a steady wind blowing for an inﬁnitely long time over an inﬁnite fetch. (In practice, the duration and fetch required to achieve something close to a fully developed sea depend on the wind speed. A steady wind of blowing for 10 hours over a fetch of 60 km might be adequate; for hurricane winds of , a fetch of a few thousand kilometers and a duration of several days would be required. Thus it is much easier to approach a fully developed sea at low wind speeds than at high.)

The Elfouhaily et al. directional spectrum includes both gravity and capillary waves scales. Moreover, it has a parameter that describes the wave age, so than any sea state from young (the wind has just started blowing) to fully developed can be simulated. The Elfouhaily et al. spectrum will be used to generate the two-dimensional sea surface examples on the following pages.

The omnidirectional Pierson and Moskowitz (1964) spectrum, formulated in terms of angular spatial frequency , is

,
,
is the acceleration of gravity,
is the wind speed in at 19.5 m above the sea surface, and
is the angular spatial frequency in .

The wind speed at 19.5 m can be obtained from the more commonly used wind at 10 m above the sea surface by the approximate formula

To change the variable from to , the previous equation gives

All of these formulas have units of meters squared over the appropriate frequency. (The quantities and seen in the conversions are the Jacobians for the one-dimensional changes of variables.) Figure 1 shows the Pierson-Moskowitz spectrum as functions of and for wind speeds of , and . 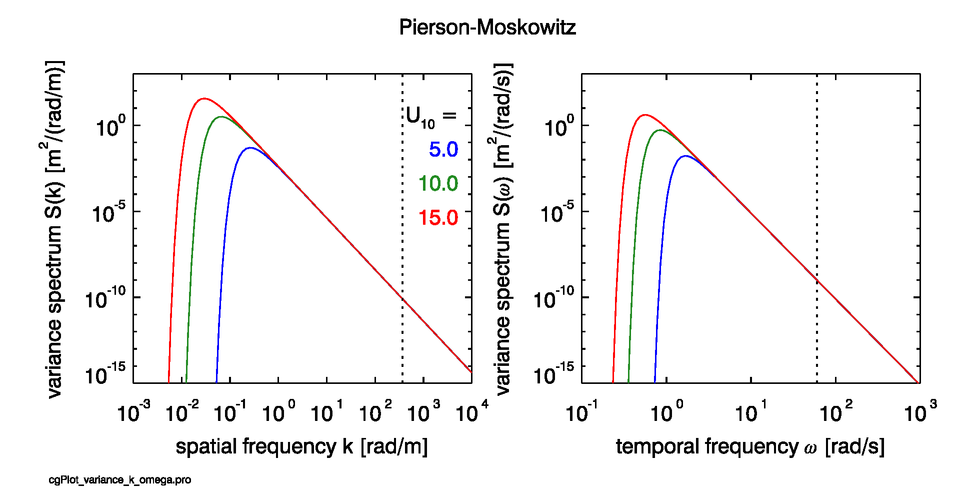 Figure 1: The Pierson-Moskowitz variance spectrum as functions of and for wind speeds of , and . The vertical dotted lines at and show the boundary between gravity and capillary waves.

This spectrum has withstood the test of time fairly well (Alves and Banner (2003)) as a description of gravity waves in fully developed seas. However, it should not be used for high-frequency (short-wavelength) gravity waves, and certainly not for capillary waves. Likewise, it does not describe young seas, which have not had the time or fetch needed to approach the state of a well developed sea. 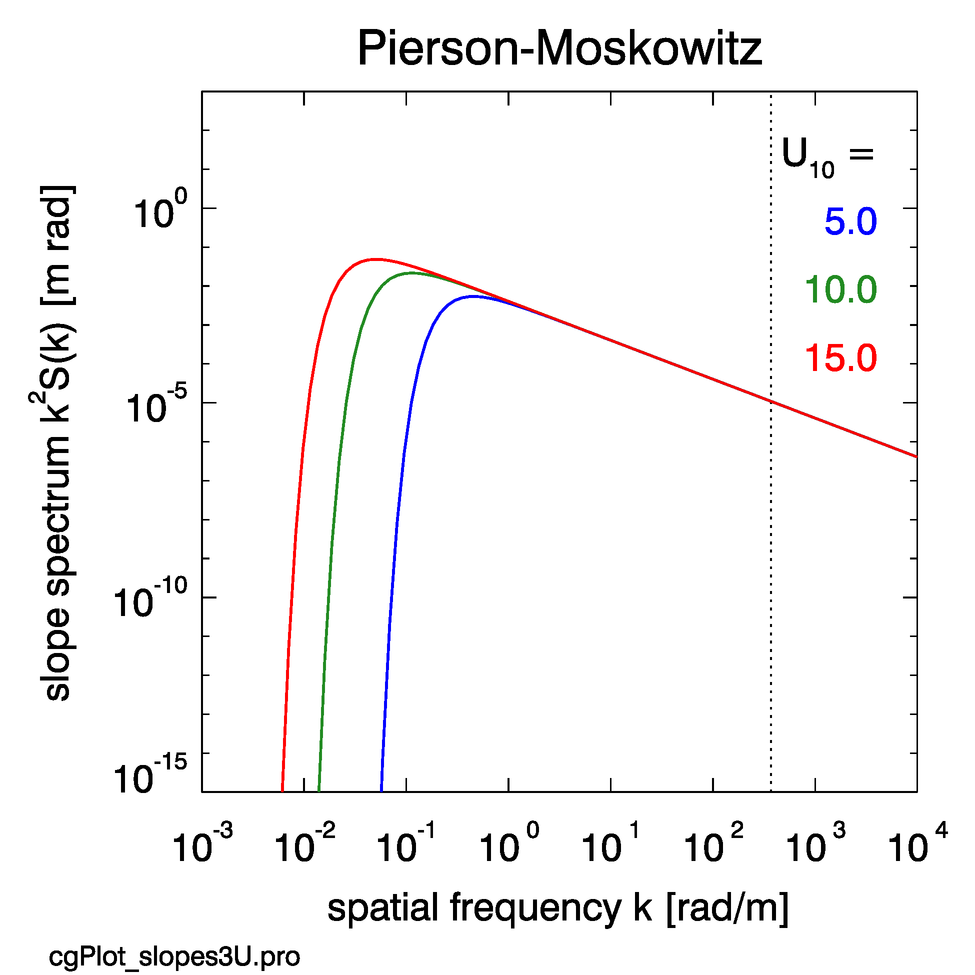 In order to model two-dimensional sea surfaces , we need a 2-D wave elevation variance spectrum that describes the distribution of wave variance for waves propagating in diﬀerence directions. The numerical examples of 2-D sea surfaces to be seen on the following pages use the 2-D elevation variance spectrum of Elfouhaily et al. (1997), which is described here for later reference. For brevity, this paper and their model are denoted here by ”ECKV,” taken from the initials of the authors’ last names.

The ECKV spectrum has an omnidirectional variance spectrum that explicitly includes both the gravity and capillary wave scales. The boundary between gravity and capillary waves is taken to be , the angular spatial frequency at which the restoring forces (which tend to bring a wave surface back to an unperturbed level surface) of gravity and surface tension are equal. The corresponding wavelength is . ECKV then combine their omnidirectional spectrum with a spreading function to obtain their one-sided, directional variance spectrum. Using their notation, the 2-D ECKV spectrum has the form

Here is the 1-D omnidirectional spectrum with units of , and is a non-dimensional spreading function. thus has units of . Equation labels such as [ECKV 45] give for reference the corresponding equation in the ECKV paper.

The ECKV omnidirectional spectrum is

where is the low-frequency (long gravity wave) contribution to the variance, and is the high-frequency (short gravity wave to capillary wave) contribution. (The quantity is called the curvature or saturation spectrum and is of interest in physical oceanography because it is related to the rate of variance dissipation of the waves. Thus ECKV refer to and as the low and high frequency curvature spectra.) The components of the omnidirectional spectrum are given by

,
,
is the acceleration of gravity,
is the wind speed in at 10 m above the sea surface
is the angular spatial frequency in
is deﬁnes the age of the waves for the given wind speed:

At the lower frequencies, the ECKV spectrum is essentially the Pierson-Moskowitz spectrum (the term above) with an enhancement (the term) that adds more energy to the lower frequencies. The highest frequencies have a cutoﬀ due to viscous damping of the smallest capillary waves. The ECKV omnidirection elevation and slope spectra are illustrated in Fig. 3 for the case of a fully developed sea and three wind speeds. Figure 4 shows the spectra as a function of wave age for a wind speed of . 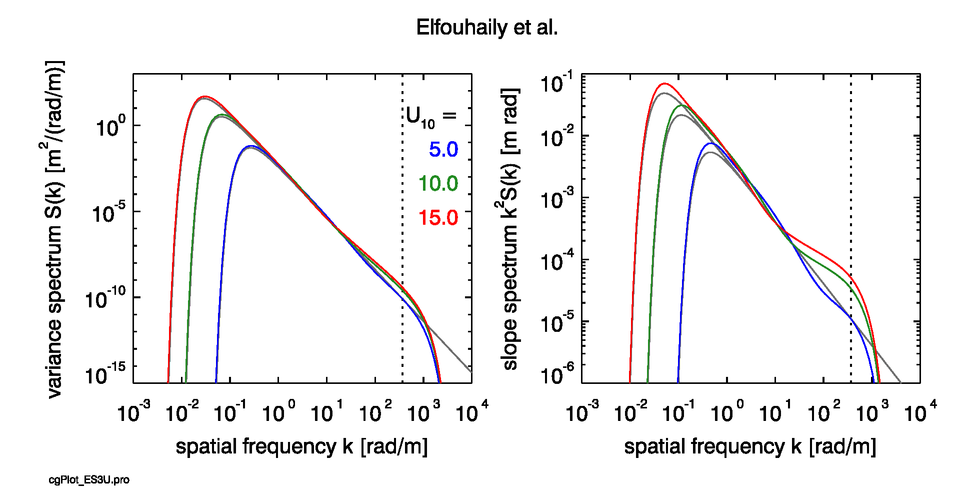 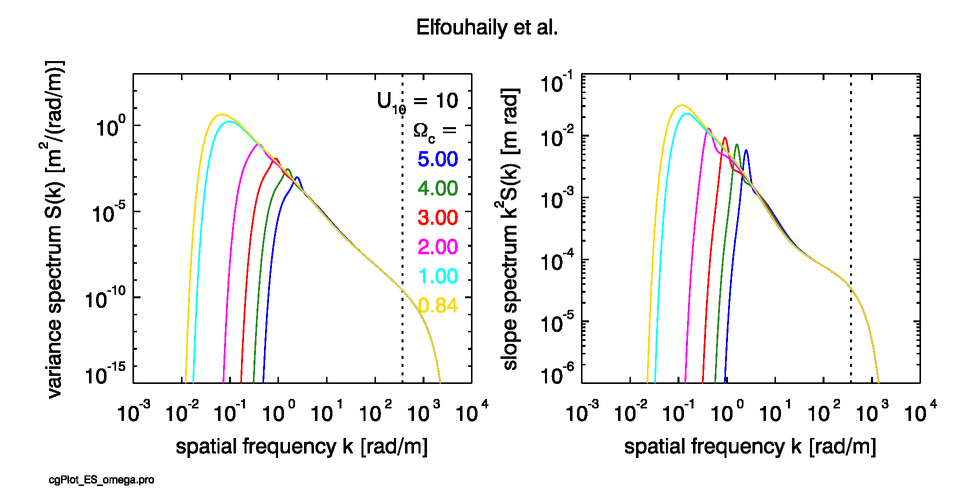 Figure 4: The omnidirectional part of the ECKV elevation spectrum (left panel) and slope spectrum (right panel) for a wind speed of and wave ages from very young () to mature () to fully developed (). Compare with Fig. 3.

The ECKV spreading function is given by

Note that this function is symmetric about ; i.e., the function has symmetric spreading downwind and upwind. This is consistent with a symmetric variance spectrum as would be obtained from the Fourier transform of a snapshot of a sea surface. This symmetry will be explained on the following pages.

A commonly used family of alternate spreading functions is given by the ”cosine-2s” functions of Longuet-Higgins et al. 1963, which have the form

where the normalizing coeﬃcient is

and is a spreading parameter that in general depends on , , and wave age. In this equation is the customary gamma function deﬁned by where . The cosine-2s functions are asymmetric, with much stronger downwind than upwind propagation.

The ECKV and cosine-2s spreading functions are illustrated in Fig. 5. Both of these functions satisfy the normalization condition (??). Both spreading functions transition from strongly forward peaked at low spatial frequencies (long gravity waves; the red curves) to curves with signiﬁcant propagation at right angles to the wind at high frequencies (capillary waves; the blue curves). The cosine-2s curves are asymmetric in and have at least a small amount of upwind propagation at all frequencies (except at exactly upwind, ). Not surprisingly, the real ocean is more complicated than either of these models. In particular, observations of long-wave gravity waves tend to show a bimodal spreading about the downwind direction, which transitions to a more isotropic, unimodal spreading at shorter wavelengths (Heron (2006). However, the simple models of Eqs. (6) and (7) are adequate for the present purpose of illustrating surface-generation techniques. The eﬀect of the choice of spreading function on the generated waves will be illustrated on the Spreading Function Eﬀects page. 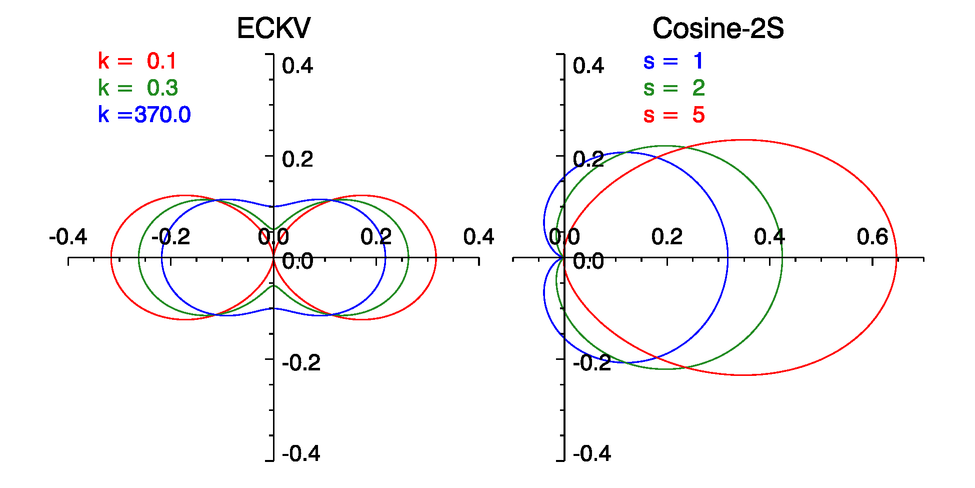 Figure 5: Example spreading functions according to the ECKV model (left) and the cosine-2s model (right) for a wind speed of . Small values correspond to large spatial frequencies . Downwind is to the right, upwind is to the left.

On the following pages we will learn the important distinction between ”one-sided” or ”folded” spectra and the associated ”two-sided” spectra. The ECKV spectrum as given above is a one-sided spectrum.