This equation governs the propagation of unpolarized monochromatic radiance at a particular wavelength in a one-dimensional absorbing and scattering medium.

The question now arises: Is there a similar equation for the propagation of luminance? It is to be anticipated that a luminance transfer equation may be more complicated than the SRTE because it of necessity must involve all visible wavelengths and the response of the human eye.

To develop a luminance transfer equation, multiply Eq. (1) by the photopic luminosity function and integrate over all visible wavelengths. Let denote the range of wavelengths for which . The term on the left hand side of the SRTE then becomes

where the luminance is deﬁned by Eq. (1) of the Photopic Luminosity Function page:

This term does not give a product of an integral over wavelength of the beam attenuation coeﬃcient times the luminance. However, we can rewrite this term as

then the term of the SRTE maintains the same form, , in the luminance transfer equation.

A similar treatment of the path radiance term of the SRTE leads to a deﬁnition for the photopic volume scattering function:

Collecting the above results gives the desired luminance transfer equation:

This equation governs the propagation of broadband luminance as seen by the human eye in a one-dimensional absorbing and scattering medium. Equation (4) is the basis for the classical deﬁnition of contrast as used in visibility studies.

Dependence of on the Ambient Radiance

It is important to note that the photopic beam attenuation coeﬃcient as deﬁned in Eq. (2) depends on the ambient radiance distribution, hence on direction , even though the beam attenuation is an inherent optical property (IOP) that does not depend on the ambient radiance or direction. Moreover, meets the deﬁnition of an apparent optical property as deﬁned on the Apparent Optical Properties page: it depends on the IOPs of the medium (here the beam attenuation ) and on the ambient radiance distribution, and it is insensitive to external conditions (e.g., rescaling by a multiplicative factor does not change the value of ). The same holds true for the photopic volume scattering function deﬁned in Eq. (3) and for any other IOP. Thus, in going from a monochromatic radiative transfer equation to a luminance transfer equation, inherent optical properties become apparent optical properties. This is the penalty to be paid for going from an equation for monochromatic radiance as measured by instruments to an equation for luminance observed by a human eye.

However, in practice, there seems to very little dependence of on the ambient radiance (as would be expected for a “good” AOP). The left panel of Fig. 1 shows the beam attenuation for a simulation of homogeneous Case 1 water with a chlorophyll concentration of (obtained using the new Case 1 IOP model in HydroLight). The Sun was at a zenith angle of in a clear sky, which gives a transmitted solar beam of about 29 deg in the water; that beam will lie in the HydroLight quad centered at . The right panel of Fig. 1 shows the radiance at 10 meters depth looking in four directions: looking upward into the Sun’s transmitted beam, looking in the nadir and zenith directions, and looking horizontally at right angles to the solar plane.

Figure 1: Left panel: Total (including water) beam attenuation for a chlorophyll concentration of (black curve), and the photopic luminosity function (green). Right panel: Radiances at a depth of 10 m for the Sun at a zenith angle of 40 deg in a clear sky. (red curve) is looking upward into the Sun’s refracted beam. (purple) is the upwelling (nadir-viewing) radiance; (orange) is the downwelling (zenith-viewing) radiance; and (green) is the horizontal radiance in the direction perpendicular (azimuthal angle of ) to the solar plane. and have been multiplied by 20 for better visibility in the plot. Numbers at the right show the photopic beam attenuation for the four radiance spectra.

Figure 2 shows the corresponding results for a chlorophyll concentration of and a 5 m depth. Again, the four diﬀerent radiances give the same to within a fraction of a percent, and these values are within one percent of the beam attenuation value .

Figure 2: Same as for Fig. 1, but for a chlorophyll concentration of and a 5 m depth.

However, this is not the case. Figure 4 shows the radiances seen by an observer at 15 m depth. Again, the values diﬀer by only about one percent from the value of . The same holds true at other depths (not shown). 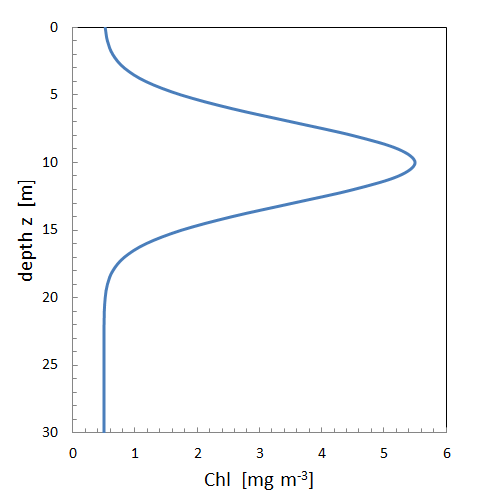 Figure 3: The chlorophyll proﬁle used in the simulations of Fig. 4.

Figure 4: Same as for Fig. 1, but for the depth-dependent chlorophyll proﬁle seen in Fig. 3 and a 15 m depth.

Exhaustive simulations have not been made, so it might be possible to create a contrived water body for which the photopic beam attenuation would be signiﬁcantly diﬀerent for diﬀerent viewing directions, and for which would be signiﬁcantly diﬀerent from . However, the above simulations indicate that in many situations of practical interest, there is little dependence of on viewing direction, and that is within a percent or so of the beam attenuation at the 555 nm wavelength of the maximum of the photopic luminosity function.

These simulations are consistent with the results of Zaneveld and Pegau (2003), who found that the beam attenuation coeﬃcient at 532 nm (excluding the water contribution) is a good proxy for the photopic beam attenuation.

Comments for The Luminance Transfer Equation: