The Level 2 pages of this chapter describe particular atmospheric correction algorithms, i.e., algorithms used to remove the various unwanted contributions to the top-of-the-atmosphere radiance. The next seven pages discuss, one by one, the various corrections made to the TOA radiance during the atmospheric correction process as implemented (as of 2016) by the NASA Ocean Biology Processing Group (OBPG) for processing satellite imagery. The philosophy of these pages is simply to show “Here is what is done. See the references for the historical development and scientiﬁc basis of the algorithms.”

The ﬁrst two pages show how to account for absorption and scattering by atmospheric gases. Sun glint and whitecap reﬂectances are then discussed, followed by the various aspects of correction for the eﬀects of atmospheric aerosols. Two pages then discuss the sensor-speciﬁc corrections for spectral out-of-band response and for polarization. The ﬁnal two pages describe methods for atmospheric correction that are sometimes used for airborne imagery or in situations for which the OBPG algorithms are not applicable.

For satellite imagery, the entire sequence of data processing beginning with the measurement of a TOA radiance and ending with the output of a geophysical product such as a global map of chlorophyll concentration is divided into a number of processing levels. These steps are deﬁned in Table 1. The OBPG atmospheric correction process described here takes the data from Level 1b to Level 2.

Figure 1 shows the sequence in which the various corrections are applied during the overall process. 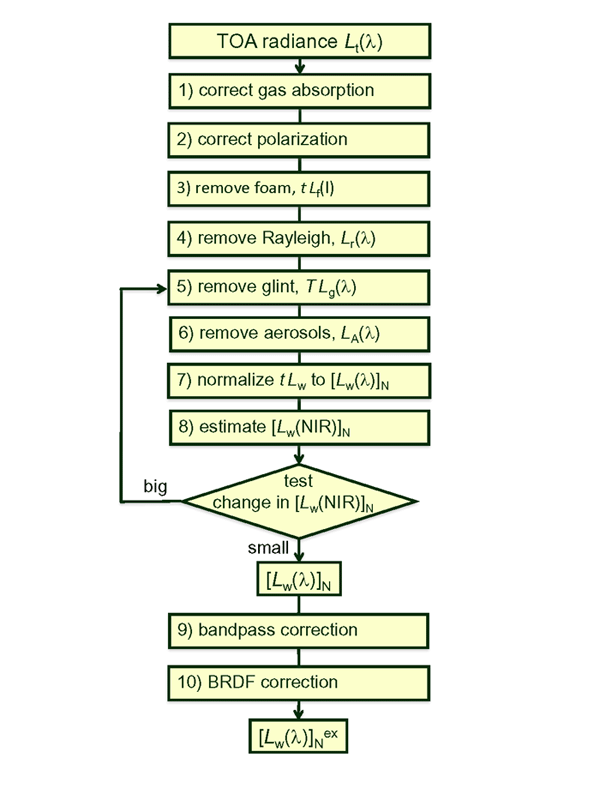 It is important to keep in mind that there are severe computational constraints on how atmospheric correction is performed on an operational basis. The MODIS-Aqua sensor, for example, collects about 1.4 terrabytes of data per day. The requirement to routinely process this amount of data (along with data from many other sensors) requires that various approximations be made in order to speed up the calculations. Some of the corrections require ancillary information such as sea level pressure, wind speed, and ozone concentration, which are not collected by ocean color sensors themselves. These ancillary data may be inaccurate or missing, in which case climatological values must be used. The quality of the ancillary information impacts the accuracy of the atmospheric correction. Table 2 shows some of the ancillary data and its sources as used by the various OBPG atmospheric correction algorithms.