This page considers electric and magnetic ﬁelds inside materials.

We begin with the eﬀects of electric ﬁelds on dielectrics. Dielectrics are materials that do not easily allow the ﬂow of electric charge, so they are also called insulators. Dielectrics include materials like water, glass, wood, or plastic, but not metals, which easily conduct electricity. 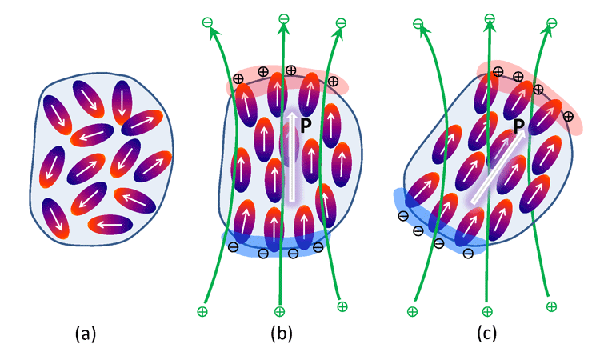 However, if the dielectric is placed in an external electric ﬁeld, that ﬁeld can cause the dipole moments to align so that the substance has a net dipole moment, or non-zero polarization , as illustrated in Fig 1(b). In this ﬁgure, the green symbols with plus and minus signs represent positive and negative charges creating the external electric ﬁeld, which is illustrated by the green arrows. The negative ends of the polar molecules are attracted to the positive charges creating the external ﬁeld, and the positive ends to the negative external charges, so the molecules align as shown. (In practice, this is a complicated business. The applied electric ﬁeld tends to align the polar molecules, but random thermal motions tend to randomize the directions. Thus, for a given material, depends on temperature. It takes time for the molecules to rotate into alignment, so if the applied ﬁeld is not constant, depends on the frequency of the applied ﬁeld. These details need not concern us here, but this is the origin of the frequency (wavelength) dependence of the index of refraction, for example.)

Note that as the molecules align in response to the external ﬁeld, there is a net accumulation of positive charge on the surface of the material nearest the negative external charges, as illustrated in Fig 1(b) by the reddish area and the black symbols with plus signs. In essence, the positive “heads” of the molecules are sticking out of the volume of material. Likewise, there is an accumulation of negative charge on the opposite side of the material caused by the negative “tails” of the molecules, as illustrated by the bluish area and the black symbols with minus signs. In the interior of the matter, the net charge remains zero because nearby positive heads and negative tails cancel each other out. The external charges (the green + and - symbols in Fig. 1(b)) creating the applied ﬁeld are called “free” charges because I am free to place them as desired in order to create the external electric ﬁeld. The charges on the surface of the material are called “bound” charges because they are ﬁxed to the material and cannot be moved around as desired.

The bound charges on the surface of the material create an electric ﬁeld directed opposite to the applied ﬁeld. Recall the bookkeeping: electric ﬁelds are by convention directed from positive to negative charges, but dipole moments, hence , are directed from negative to positive charges. Thus we expect that the total electric ﬁeld inside the material will be less than the externally applied electric ﬁeld. This is why capacitors are ﬁlled with dielectric material. By decreasing the electric ﬁeld between the plates of the capacitor, the capacitor can store more charge before a spark jumps from one plate to the other. The ﬁeld set up by the bound charges will also distort the ﬁeld of the free charges in the region outside the dielectric.

Even if the molecules or atoms of the dielectric are symmetric and have no dipole moment in the absence of an electric ﬁeld, they will become polarized in the presence of an applied ﬁeld. This is because the applied ﬁeld tends to pulls the negative electron cloud in one direction and the positive nucleus in the other direction, creating a dipole moment.

To continue the development, recall for reference the forms of Maxwell’s equations in vacuo:

Inserting this into Eq. (1) gives

Deﬁning the electric displacement as

In summary, we can avoid having to know the details of the dielectric properties by solving for something, the displacement ﬁeld, that is not really what we want, but which is related to the electric ﬁeld. Note that the displacement does not have the same units as , and may not even be in the same direction as (the situation of Fig. 1(c)). (There are other subtleties associated with . For example, there is no equivalent of Coulomb’s law for , but those discussions are left to the textbooks.) Note also that the remaining three Maxwell’s equations (2)-(4) remain unchanged because they do not involve the charge density.

Here the current density refers to all currents, and is the magnetic ﬁeld either outside or inside matter. In addition to free currents and bound currents , in analogy with free and bound charges, there will also be a current associated with a time-dependent polarization. A change in the electrical polarization of a material implies moving charges around, which gives a “polarization” current . We can thus partition the total current density into three parts:

The polarization current is given by

The Ampere-Maxwell law (4) can now be rewritten as

Deﬁning the magnetic intensity by

and recalling the deﬁnition (5) of then gives

In this equation, we have hidden our ignorance about the magnetic properties of the material inside the term. Note that the magnetic intensity does not have the same units as the magnetic ﬁeld , and in general the two are not even in the same direction. However, we can solve for given only the free current density and the displacement , which depends only on the free charge density . Then, if we are smart enough to ﬁgure out for the material at hand, we can extract the desired from Eq. (8).

We now have Maxwell’s equations in the form usually seen in discussions of arbitrary materials:

It may seem that we now have four equations in four unknowns, but Eqns. (5) and (8) make clear that all we have done is rewrite the original four equations with their two unknowns. In order to solve these equations, we must specify the free charge density and the free current density along with boundary conditions on the ﬁelds.

A word of warning is needed regarding terms and units for magnetic ﬁelds. I grew up with called the magnetic ﬁeld and the magnetic intensity, and I’m too old to change. However, the venerable Jackson (1962), the standard graduate-level text on electromagnetic theory for over 60 years, calls the magnetic ﬁeld and the magnetic induction. The equally competent and respected Griﬃths (1981) calls the magnetic ﬁeld and the auxillary ﬁeld. Griﬃths (page 232) says calling the magnetic induction is “an absurd choice” because it leads to confusion with electromagnetic induction, which is something totally diﬀerent. He also says, “ has no sensible name; just call it ’’ ”. The great Arnold Sommerfeld, doctoral or postdoctoral adviser to seven students who later won Nobel prizes, says that (in Electrodynamics, 1952, page 45) “The unhappy term ’magnetic ﬁeld’ for should be avoided as far as possible.” The thing to keep in mind is that and are the fundamental quantities; and arise from rewriting the fundamental equations (Eqs. 1 to 4 of the previous page) in forms convenient for material media. To make matters even worse, the units of and , whatever you call them, depend on the system of fundamental units chosen. Here I have used SI units (previously called “rationalized mks” units). and then have diﬀerent units, as we have seen. However, in the cgs (centimeter-gram-second) system, is deﬁned by , where is the speed of light. This is convenient because and then have the same units of Tesla, but then Maxwell’s equations are slightly diﬀerent. In cgs, the Ampere-Maxwell equation (12) reads . This whole business is a confusing mess; see the discussion in Feynman et al. (1964) §36-2.

This qualitative discussion is suﬃcient for most oceanographers. If nothing else, you can now hold your own at a cocktail party full of undergraduate physics majors. But in all seriousness, it is worth keeping in mind the importance of Maxwell’s synthesis. He tied together apparently unrelated results describing electric and magnetic ﬁelds, ﬁnished oﬀ Ampere’s law, and showed that light of any frequency is a propagating electromagnetic wave. Everything in the modern world that has to do with electricity or magnetism or optics rests upon these equations—generation of electrical current in a hydroelectric plant, the use of that current in an electric motor, radio, television, mobile phones, computers, microwave ovens, lasers, and so on ad inﬁnitum. In oceanography, the well known Fresnel equations for the reﬂection and transmission of light at the sea surface arises from solving Eqs. (9)-(12) for a plane wave incident onto an interface between two dielectric media. The widely used Mie theory for the scattering of light by spherical particles is the solution of these equations for a plane wave incident onto a spherical dielectric.

You would have to return to the early 1800s—when lighting was by candles and oil lamps, communication was by handwritten letters delivered by riders on horses, and calculations were done with a quill pen and paper—to live in a world without applications of Maxwell’s equations.

In addition to his work on electromagnetism, Maxwell made major contributions to thermodynamics (the Maxwell relations connecting temperature, entropy, pressure, and volume) and statistical mechanics (the Maxwell-Boltzmann distribution). He developed an explanation for the dynamics of Saturn’s rings that is still used today. He even made the ﬁrst color photographs. Although less known to the general public, Maxwell stands with Newton, Einstein, and Darwin as one of the most profound intellects the world has ever known.

Comments for Maxwell's Equations in Matter: