Energy Conservation Within the Water

Within the water column, if there are no internal sources such as bioluminescence or inelastic scatter contributing to the wavelength of interest, conservation of energy is expressed in terms of irradiances by Gershun’s law:

Here is the absorption coeﬃcient, is the scalar irradiance, and and are the downwelling and upwelling plane irradiances. This equation can be illustrated using numerical results generated by htmladdnormallinkHydroLight/view/radiative-transfer-theory/level-2/hydrolight. A run was made with the sun placed at a 60 deg zenith angle in a clear sky; the wind speed was , and the water was inﬁnitely deep. The absorption coeﬃcient was set to , the scattering coeﬃcient to , and a Petzold “average-particle” phase function was chosen. (The run used HydroLight’s “Constant IOPs” submodel for these inputs.) No internal sources were included in the run. Table shows the computed irradiances at depths of 5.00 and 5.01 m. Closely spaced depths are used to illustrate Eq. eqrefEq:Gershun so that the depth derivative can be accurately approximated as a ﬁnite diﬀerence and the scalar irradiance can be taken as the average of the values at 5.00 and 5.01 m.

Table 1: Irradiances computed within the water body as described in the text. Irradiances have units of .

Using these values in the ﬁnite diﬀerence approximation of Eq. (1) gives

The absorption coeﬃcient as computed from the irradiances via Gershun’s law is the same as the one used as input to the run, so HydroLight is conserving energy in its in-water solution of the radiative transfer equation. (HydroLight also conserves energy if internal sources are present. Demonstration of that requires adding an appropriate source term to Gershun’s equation; see Eq. (6) of the Gershun’s Law page or Light and Water (1994) Eq. 5.34.) Such accuracy cannot be expected with real data because of imperfect instrument calibration and other sources of error such as Raman scatter (an internal source not accounted for in Eq. eqrefEq:Gershun, which will always be present to some degree during daylight measurements. Nevertheless, Gershun’s law can be a useful way to retrieve absorption coeﬃcients from in-water radiance or irradiance measurements, as seen in papers by Voss (1989) and Maﬃone et al. (1993).

Energy Conservation Across the Air-Water Surface

The situation is more complicated when considering energy conservation across the air-water surface. Consider a collimated beam of light incident onto a level sea surface. Part will be reﬂected and part will be transmitted into the water. Figure 1 shows this geometry and various quantities needed to express conservation of energy at the surface. 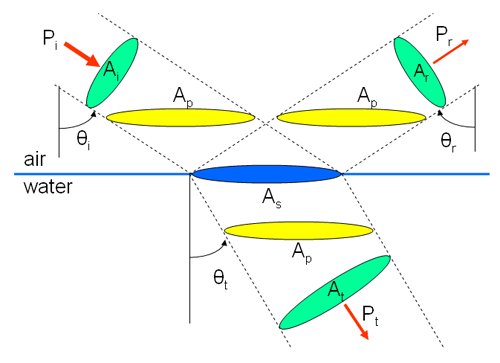 Figure 1: Geometry needed for expressing the law of conservation of energy in terms of irradiances across a level sea surface.

Conservation of energy (or equivalently, power) across the surface requires that

Equation (3) is conservation of energy across the surface expressed in terms of plane irradiances for a collimated incident beam.

To express Eq. (2) in terms of the scalar irradiances, ﬁrst recall how is obtained from the radiance (Eq. 6 of the Geometrical Radiometry page):

For a collimated incident beam in direction , we can write the radiance in terms of the beam irradiance and a Dirac delta function to get

after noting that by the law of reﬂection. By geometry, the ratio of areas is just . can be written in terms of using Snell’s law, , where is the real index of refraction of the water. Equation (4) then becomes

Equation (5) is conservation of energy expressed in terms of scalar irradiance for a collimated incident beam.

To illustrate Equations (3) and (5) with HydroLight output, a run was made with the sun at a zenith angle of in a black sky, in order to obtain a collimated incident beam. The incident onto the surface was set to 1. The sea surface was level (zero wind speed), and the water index of refraction was . The scattering coeﬃcient within in the water was set to zero, so that upwelling light from the water column would not confuse the illustration of energy conservation across the sea surface itself. The absorption coeﬃcient was set to . (These runs used HydroLight IOP model “Constant IOPs” and the “idealized sky model”).

Table 2: Plane and scalar irradiances for a collimated incident beam and no scattering within the water.

A run was then done with a heavily overcast sky to generate a diﬀuse sky radiance pattern with the sun’s location not discernable. The wind speed was to generate a non-level sea surface. The resulting irradiances are shown in Table

Table 3: Plane and scalar irradiances for a diﬀuse incident sky radiance and no scattering within the water.

As before, these plane irradiances satisfy Eq. (3). However, the scalar irradiances do not satisfy Eq. (5). The reason is that Eq. (5) must be applied for each particular incident direction of the diﬀuse sky radiance, in order to correctly compute the angle factor seen in Eq. (5). If this is done one direction at a time (with the sun in a black sky), each individual incident direction satisﬁes Eq. (5) just as in the previous example. Thus energy is conserved across the surface “beam by beam,” hence in toto, even if it is not obvious from the total scalar irradiances.

A further complication occurs when the water body has scattering. To illustrate this, the scattering coeﬃcient was set to and a Petzold “average-particle” phase function was used in the previous simulation. The computed irradiances were then

Table 4: Plane and scalar irradiances for a diﬀuse incident radiance, with scattering in the water.

Now even the plane irradiances appear to violate conservation of energy, Eq. (3). The reason is that and in air contain both surface-reﬂected radiance (as before) and radiance transmitted upward through the sea surface. Likewise, and in the water contain both downward transmitted irradiance (as before) as well as upwelling radiance that has been reﬂected back downward by the surface. This makes it appear at ﬁrst glance that the irradiances do not add up correctly, even though energy actually is conserved across the air-water surface. The eﬀects of both the surface itself and the water body can be accounted for simply by tallying the plane irradiances incident onto and leaving the surface from above and below:

Equation (6) expresses conservation of energy for the surface plus water body, for any conditions of incident lighting and water IOPs. The irradiances seen in Table () satisfy this equation.

Another complication occurs when expressing conservation of energy across the surface in terms of radiance. Now it is necessary to account for changes in both the beam cross sectional area and in solid angle when going across the surface. When interpreting HydroLight output, it must be remembered that the computed radiances are averages over “quads” or solid angles of ﬁnite size, as discussed on the HydroLight page. Such quads are represented by the green areas in Fig. (2). 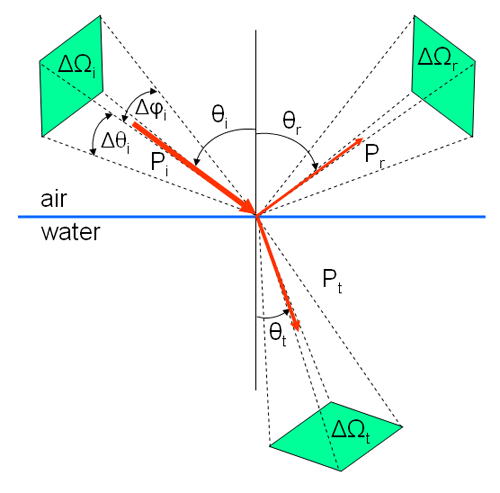 Figure 2: Illustration of the HydroLight radiance quads as needed to express energy conservation for a collimated beam across a level sea surface.

Remembering that radiance is power per unit area per unit solid angle, Eq. (2) can be written as

after noting that and by the law of reﬂection. As noted before, . The solid angles are given by , where the angle ranges are determined by the and boundaries of the quads. Thus the last equation becomes

since for the HydroLight quad layout. These angle factors must be evaluated for the particular quads associated with the incident and transmitted beams.

The corresponding computed quad-averaged radiances for this run were , , and . These radiances satisfy Eq. (8). Thus energy expressed as radiance is conserved beam-by-beam across the water surface.

We have seen that conservation of energy across the sea surface can be expressed in various ways in terms of radiance and irradiances. However, those expressions are often written for collimated incident beams and consider only the surface itself (Eqs. 3, 5, and 7). It is therefore not always obvious that energy is conserved for the entire surface plus water column when looking at data or simulations for realistic conditions of sky radiances and water IOPs. In general, Eq. (6)should be used to check conservation of energy across the sea surface with measured or modeled plane irradiances.